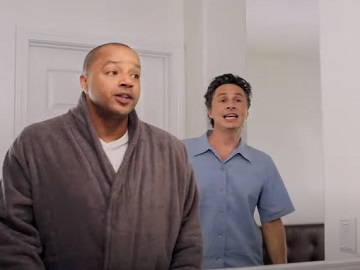 Donald Faison gets Zach Braff to switch to T-mobile Home Internet in the latest commercial released by the carrier.

The spot features the Scrubs stars as next-door neighbors. Faison plays a nosy neighbor who unexpectedly shows up in front of Braff’s character to convince him to switch to T-Mobile Home Internet because it’s $50 a month, with no price hikes, and runs on T-Mobile’s Wireless 5G network so all he gotta do is plug in one cord.

The commercial ends with the voiceover introducing the T-Mobile Home Internet, priced at just $50 a month with AutoPay, with no price hikes and no hidden fees.

It also turns out that Faison managed to convince Braff to switch. The latter reveals he switched to T-Mobile Home Internet and he’s loving it.

The two friends also co-starred in T-Mobile’s Super Bowl 2022 commercial. The ad features them singing a parody version of West Side Story’s “I Feel Pretty”. While Braff gripes about overpaying for the internet, Faison brags of his affordable deal with T-Mobile.