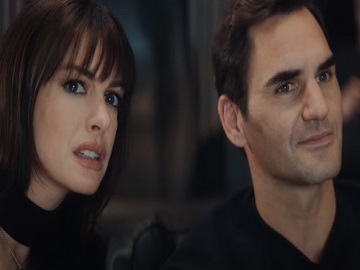 The spot, titled “No one upstages the Grand Tour of Switzerland,” features the award-winning actress and the tennis champion watching a commercial they filmed for the Grand Tour of Switzerland and being quite dissatisfied with the result because they can’t be seen. “We look like ants,” Hathaway says looking at a scene of them driving along the picturesque Furka Pass and realizing that no one will realize it’s them in the tiny car seen on the screen.

The director tries to deal with the situation by telling them they have a “masterpiece” on their hands. He then explains that the reason they can’t be seen in the ad is due to their chemistry together which was “so electric it needed to be framed delicately by the majestic Swiss landscape”.

Realizing that only wide shots were used in the video, Federer wants to know the reason why he and Anne were made to parkour “22 times” over glaciers. At this point, all the other persons in the room raise their hands when asked by the director who had goose bumps when watching this “performance”.

Toward the end of the short film, Federer also points out that his abs couldn’t even be seen, which leads one writer in the room to say that maybe they should write something like “The Grand Tour of Switzerland, even more majestic than Roger Federer’s abs” as a tagline.

As the two co-stars walk away off-screen, the voiceover reveals the real tagline: “Anne and Roger learned the hard way that no one upstages the Grand Tour of Switzerland”.

The tennis champion, who became a brand ambassador for Switzerland Tourism in 2021, has also starred in a similar ad alongside Robert De Niro.