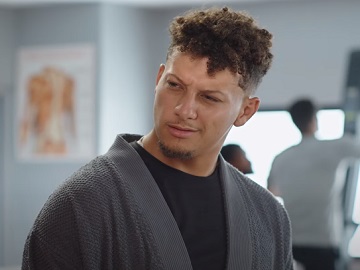 The spot opens with Mahomes telling Jake, who appears at the gym, where Mahomes is ready to take a cold bath in the bathtub, that he really wants that Personal Price Plan. He also reveals that he’s a bomb bath guy and starts throwing bath bombs into a bathtub, creating lots of bubbles.

Surprised to learn that, Jake tells Mahomes he doesn’t need to get that personal and that “State Farm Personal Price Plan simply helps you create an affordable price just for you”. “For real?” asks Mahomes hearing this news. At this point, a man with a saxophone shows up, asking Mahomes if he’s ready for some jazz bath, but he makes some signs to make him go away and acts as if he doesn’t know him.

“Like a good neighbor, State Farm is there” Jake says in voiceover at the end of the commercial.