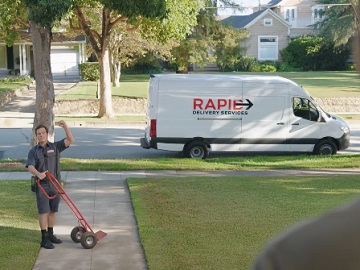 Jake from State Farm is back to the screens in a new commercial, promoting the bundling options.

The 30-second ad opens with a man saying goodbye to Tom, a delivery person who has just left some packages for him. “I knew that was the last time I’d see Tom,” the protagonist tells Jake from State Farm, who’s standing on the porch near him. The guy then admits that he was spending too much online. Jake tells him, in response, to not give up on what he loves because State Farm has options like bundling home and auto so he gets a rate that fits his budget. Hearing the good news, the man shouts at Tom to let him know that he’s going to buy more stuff.

The commercial ends with Jake saying “For surprising great rates that fit any budget. Like a good neighbor, State Farm is there”.

Jake from State Farm is played by Kevin Mimms (real name Kevin Miles), a famous social media influencer and actor native of Chicago, who became the new face of State Farm in 2020. His portfolio also includes appearances in commercials for several other brands, including Bose, T-Mobile, McDonald’s, Ford, Hyundai, Panera, Pepsi, and more.