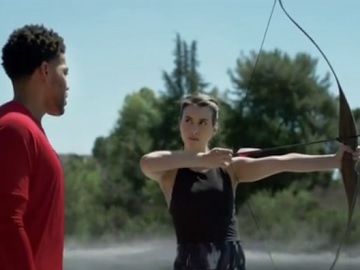 This time, he goes to a young woman who has texted him to join her somewhere near a lake, where she decided to drown her expensive gym apparel. The woman explains she’s saying farewell to her expensive gym membership and gets ready to hit the inflatable mattress on which she placed her gym equipment with a flaming arrow. Jake asks her to not give up on the things she love because “State Farm has options to personalize your policy so you get a rate that fits your budget”.

“Amazing!” she exclaims, hearing the good news, but unfortunately she gets to throw the arrow and the air mattress begins to deflate. At this point, she decides to jump in the water and get her items back to the shore.

“For surprisingly great rates, that fit any budget, like a good neighbor, State Farm is there,” Jake says at the end of the commercial.

Jake from State Farm is played by Kevin Mimms (real name Kevin Miles), a famous social media influencer and actor native of Chicago, who became the new face of State Farm in 2020. His portfolio also includes appearances in commercials for several other brands, including Bose, T-Mobile, McDonald’s, Ford, Hyundai, Panera, Pepsi, and more.