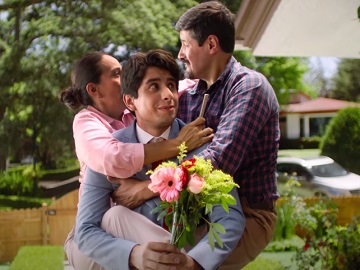 State Farm has released a series of new ads in Spanish to promote its car insurance.

One of the spots features a young man going out on a date who literally carries his parents on his back. Worried that something might happen to him or his car, they assure him that they will be there, in case he will need help. Their son asks them to not worry because he has State Farm and he can text his agent if anything happens. Learning that State Farm will be there 24 hours, his parents decide to get down off his back, which is just in time to say hello to his date, who opens the door. Unfortunately for him, the girl shuts the door in his face once his parents enter the house.

At the end of the commercial, the voiceover says the tagline “Like a good neighbor, State Farm is there”.

State Farm is known for its campaigns featuring actor Kevin Mimms as Jake. In some ads released back in May, he shared the screen with Ashly Burch, whom he helped hang onto her favorite games in a game store.