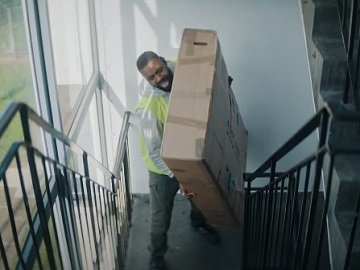 Specsavers continues its “Should’ve Gone to Specsavers” campaign with a new installment.

The spot features a deliveryman carrying a heavy mattress at the last floor of a block, on the stairs (because the elevator is out of order) only to find out, from the (wrong) recipient, that he was supposed to deliver the product to someone else, in another block.

“Should’ve gone to Specsavers” an onscreen line reads at the end of the 30-second advert.

Serving as soundtrack is “I’m Gonna Be (500 Miles)” by Scottish duo the Proclaimers, from their second studio album, “Sunshine on Leith,” released in 1988 in the UK.

The “Should’ve Gone to Specsavers” campaign includes several other hilarious ads that depict situations that the protagonists could have avoided if they would have gone to Specsavers for an eye test. One man, for instance, made the pet door in the upper part of the house door, leaving his white fluffy cat named Snowdrop struggling to enter.

The British optical retail chain has also promoted its free hearing tests, over time, with a series of hilarious new ads airing on ITV, highlighting that Specsavers Audiologists are Sponsors of Afternoons on the TV channel.