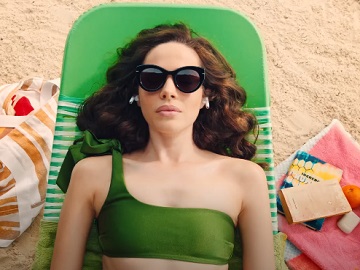 The spot features a young woman enjoying the sun, at the beach, when her boss, Greg, calls her. She immediately starts to change her look so that she would seem sick at home. She puts on another pair of glasses, pulls her hair back in a ponytail and a scarf on her shoulders. Then, using a different background, she answers the call and tells her boss that she’s been off all morning.

At the end of the commercial, the voiceover says that “It’s good to have another look” and urges viewers to get two designer pairs, no gap, from the $199 single vision range when they’re with selected health funds.

The offer is valid in store only, for single vision lenses only. Both pairs must be for the same person. The deal is also subject to your policy’s waiting periods, available optical annual limits, fund rules and having the appropriate levels of extras cover. Those willing to redeem this offer must present their valid health fund card in store.