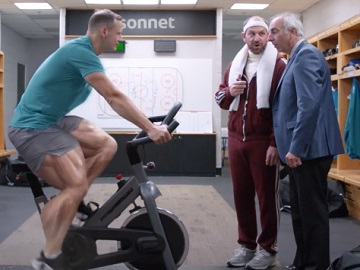 The spot, which aims to show that a major scientific breakthrough pale in comparison to the breakthroughs offered by Sonnet, features Jason Spezza of the Toronto Maple Leafs as Canada’s first horse-human hybrid because, “in the off-season his leg muscles were surgically replaced with those of a champion racehorse”. Asked by actor Justin Bott (a mainstay of Sonnet’s ad campaigns in recent months) if is there anything that can beat this, a Sonnet representative downplays the scientific breakthrough by answering he just saved with Sonnet by bundling home and auto insurance, totally online in only minutes.

The commercial ends with Spezza saying he’s a bit “skittish” after hitting the exercise bike with one of his horse legs and with the voiceover saying the tagline “Take a moment. Save a bundle”.

The campaign, which debuted in Canada on Rogers Sportsnet in early January, also features NHLPA members William Nylander of the Toronto Maple Leafs, and Jonathan Drouin and David Savard of the Montreal Canadiens, along with NHL Alumni members Doug Gilmour and Mario Tremblay.

In 2021, NHLPA and Sonnet have teamed up for a program called “Everyone Deserves a Team,” consisting of a series of virtual meet-and-greets hosted by Sportsnet broadcaster David Amber, that connected young players with current star hockey players like Patrice Bergeron, Hyman, Darnell Nurse, Sarah Nurse, and Matthew Tkachuk.