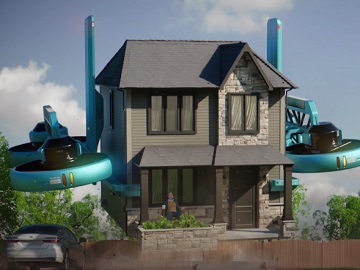 Sonnet continues its “Breakthroughs” campaign with a new installment.

The spot opens with one man having a drone-house-moving-thing which he controls with a remote control. When he tells a neighbor that having this drone-house-living-thing is so much easier, the latter answers that, if he wants a real breakthrough, he could do check Sonnet out. He then says he bought Sonnet home and auto insurance completely online, at only minutes, and shows the drone house owner the money he saved. Surprised by the amount, the drone house owner loses for a few moments the control of the house, which makes his wife shout at him to get his attention back. “I wasn’t here!,” he tells his house as an excuse for the mess he had made.

The “Breakthroughs” campaign also includes other spots aimed to show that a major scientific breakthrough pale in comparison to the breakthroughs offered by Sonnet. One of the ads features Jason Spezza of the Toronto Maple Leafs as Canada’s first horse-human hybrid because “in the off-season his leg muscles were surgically replaced with those of a champion racehorse”. Actor Justin Bott also makes an appearance, asking if is there anything that can beat this. A Sonnet representative then says that he just saved with Sonnet by bundling home and auto insurance, totally online in only minutes.

The campaign, which debuted in Canada on Rogers Sportsnet in early January, also features NHLPA members William Nylander of the Toronto Maple Leafs, and Jonathan Drouin and David Savard of the Montreal Canadiens, along with NHL Alumni members Doug Gilmour and Mario Tremblay.