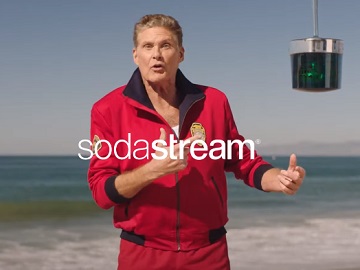 SodaStream has enlisted David Hasselhoff for its Earth Day 2022 commercial.

The Baywatch actor says that, this Eart Day, to save the sea turtles, SodaStream has partnered with seeturtles.org so part of the proceeds from each machine sold during the month of April go to save one baby sea turtle. After hearing his cue, the “Best TV lifeguard” – as he is introduced in the ad – rushes outside to save a baby sea turtle that couldn’t move forward because of some plastic glasses left on the beach. Eventually, the tiny animal is thus able to go back into the water.

“save a sea turtle, for a better planet,” onscreen lines read at the end of the commercial, which also sees the tagline “Push for Better” appearing on the screen.

SodaStream has also teamed up with several other celebrities in the past. Among them is also the rapper Snoop Dogg, who stars in a campaign that encourages consumers to reduce single-use plastic waste. Scarlett Johansson, Kristian Nairn of “Game of Thrones”, Mayim Bialik of “The Big Bang Theory”, Sarah Catherine Hook, Hafthor Bjornsson (aka “The Mountain”), Bill Nye, and Michael Buble are also among the SodaStream brand ambassadors.

SodaStream is available for purchase at several retailers, including Bed Bath & Beyond, Target, Staples, Williams Sonoma, and Amazon.