Home / Beauty / Skyrizi Nothing Is Everything Country Version Commercial Song 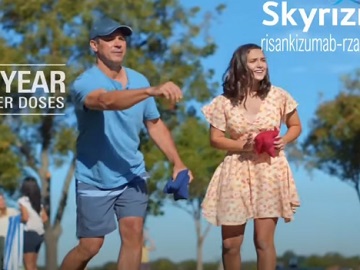 Skyrizi advertises its medication treating psoriasis in a new commercial.

The spot features a man celebrating his daughter’s sixteenth anniversary on a sunny summer day. He’s got moderate to severe plaque psoriasis but used Skyrizi, which helped him have clearer skin. He is thus now able to live a normal life, without worrying about his skin. He shakes hands with the people he meets, has fun playing games, and takes his T-shirt off to jump into the water during the garden party they hold for the teenager.

The commercial highlights that, with Skyrizi, 3 out of 4 people achieved 90% clearer skin in 4 months, and of those nearly 9 out of 10 sustained it through one year and Skyrizi is four doses a year after two starter doses. Viewers are also informed that Skyrizi may increase your risk of infections and lower your ability to fight them.

Therefore, they should be checked by their doctor for infections and tuberculosis before treatment. The voiceover also urges viewers to tell their doctor if they have an infection or symptoms such as fever, sweat, chills, muscle aches, or coughs, and if they plan to or recently received a vaccine.

“Now is the time to ask your dermatologist about Skyrizi,” the narrator adds at the end of the commercial.