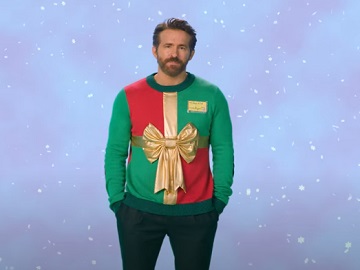 Ryan Reynolds stars in the new holiday campaign launched by SickKids Foundation. This year, for the fourth year in a row, the Canadian actor wears his special holiday red and green sweater (with a large gold bow and nametag) once again, but this time it’s the sweater that does all the talking.

The spot opens with the Deadpool star talking about how they make a video every year to help raise money for the Sick Kids Hospital. At this point, he is interrupted by none other than the sweater, which says it has grown a little tired of Ryan’s self-deprecating, deadpan jokes. “Instead, revel in the wonder of a talking sweater as you make a donation to SickKids,” the jumper, voiced by Ryan’s fellow Canadian actor, Seth Rogen.

Each time Ryan tries to say something, his holiday sweater interjects, including when Toronto Maple Leafs player Auston Matthews makes an appearance to say ‘Hello’.

Eventually, the sweater asks the production team to cut to the titles before Ryan can say something else.

Onscreen lines encourage viewers to donate before midnight on December 24th. Samsung Canada will match donations up to $100,000.