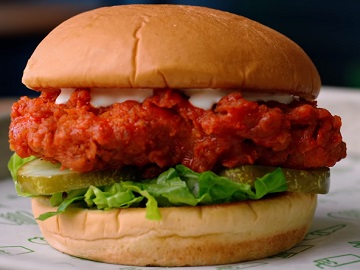 Shake Shack has released a new ad to promote its Buffalo Chicken.

“If we had to explain buffalo wings to aliens, they’d probably kill all of us,” the voiceover says in the opening of the 15-second commercial, urging viewers to get the new Shake Shack Buffalo Chicken Sandwich, which is made with crispy, hand-breaded chicken breast covered in Buffalo sauce, topped with ranch sauce over pickles and shredded lettuce, on a toasted potato bun.

Shake Shack says all its chicken is real, white-neat breast that’s fresh, never frozen, with no hormones or antibiotics. After being slow-cooked sous vide in a creamy buttermilk marinade, the chicken is dredged and breaded by hand and crisp-fried to-order every single time. The sauce features more flavor thanks to its pronounced vinegary notes and a touch of garlic.