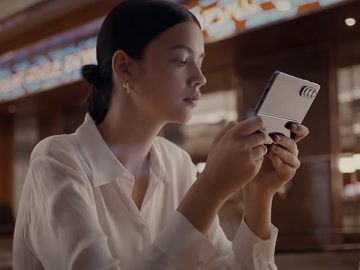 Samsung has released a new ad for its recently unveiled Galaxy Z Fold 4 and Z Flip 4.

The 30-second spot introduces the Galaxy Z Fold 4 as “The ultimate multitasking machine” and highlights its capabilities by showing several Galaxy Z Fold 4 owners using it for various purposes, such as browsing the internet, interacting with other people, working and playing.

Viewers are given a glimpse at the new Taskbar and at the way the device folds, while in the background the 2021 single “Dance!” by Pomegranate Valley is playing. The song is available for streaming on Amazon Music, Spotify, Apple Music, and other streaming services.

At the end of the commercial, the tagline “Unfold your world” flashes across the screen and consumers are encouraged to pre-order now for bonus storage and the possibility to save up to $200.