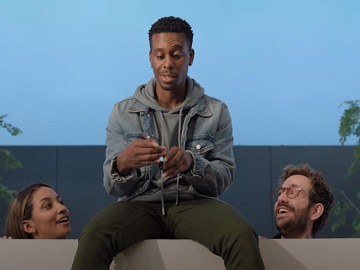 Samsung promotes its Galaxy Z Flip4 in a new commercial.

The guy states he wants to switch but he’s worried about what his friends will think. The woman tells him he should be, explaining that, “when you pull out your new Galaxy Z Flip4, people are gonna lose it.” “Really?” he asks. She confirms, mentioning that friends will never leave him alone. As she hands him over for a few seconds her Galaxy Z Flip4 to prove her point, it turns out she was right. The man’s friends immediately come closer to take a look at his new device. Delighted by their interest, he concludes he can get used to this and decides to get off the fence, on the Samsung side.

“Time to get off the fence. The Galaxy awaits you,” onscreen lines read at the end of the commercial.

The Galaxy Z Flip4, featuring an improved battery, faster processor, tougher design, and better low-light pics, is available for purchase from $309.99 with an eligible trade-in or $8.62/month for 36 months. Now you can get a Galaxy Z Flip4 memory upgrade on Samsung and enjoy 256 GB for the price of 128 GB. Moreover, you can get up to $600 enhanced trade-in credit.