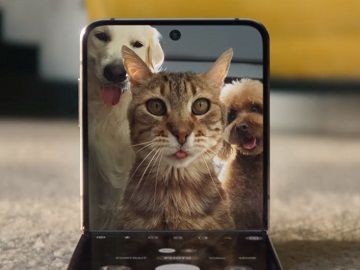 One of them features a cat who, after seeing her owner taking selfies with the Galaxy Z Flip 4, decides to use the smartphone, as well, and take some selfies too. Its photo shoot soon turns into a group photo shoot as the cute animal is joined by several other pets. They have fun but not for long as the Galaxy owner remembers their smartphone is in the living room and returns to take it back.

The song used in the ad is Struttin’ by Thumpasaurus, from their 2021 album “Thumpaverse”. The track is available for purchase on Amazon for $0.99.

The new Galaxy Z Flip 4, which improves upon the Galaxy Z Flip 3 in a number of ways, including slimmer bezels, better camera tech and an upgraded Snapdragon 8 Plus Gen 1 chipset, comes in Graphite, Pink Gold, Blue, and Bora Purple. For this last shade, the South Korean tech brand has released a dedicated commercial.