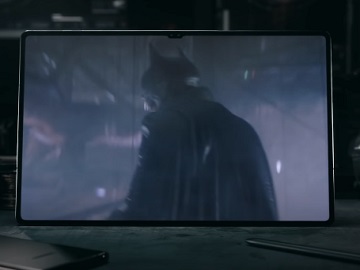 Samsung introduces its new Galaxy Tab S8 Ultra and Galaxy S22 Ultra as two fearless partners, like Batman and Catwoman, who break the rules for good to make your world a better place.

The commercial released by the tech giant, which has recently introduced the two devices, during its Unpacked event, features scenes from the upcoming Batman movie, starring Robert Pattinson as Batman and Zoe Kravitz as Catwoman. The video also gives viewers a glimpse at the Galaxy Tab S8 Ultra, which is the largest and thinnest tab in the S series, and the Galaxy S22 Ultra, which is the most powerful phone in Samsung’s Galaxy.

“What’s powerful and sleek, partners with a vengeance and sees the big picture? Galaxy Tab S8 Ultra. Break the rules.” onscreen lines read throughout the 60-second ad, which ends with an invitation for viewers to watch the Batman movie in theaters starting March 4.

The Galaxy S22 Ultra and the Tab S8 Ultra are now available for pre-order and will begin shipping on February 25.