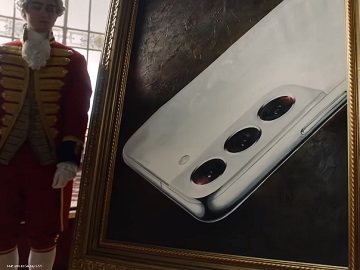 Samsung showcases its Galaxy S22 in a new commercial that ties in with Netflix hit series Bridgerton.

“The season’s investor’s ball at the palace is a highly sought after invitation,” an onscreen line reads in the opening of the 30-second ad, which features Lord Tristar unveiling massive paintings of the Samsung Galaxy S22, which makes Queen Charlotte (played by Golda Rosheuval) say “It is beautiful”.

The Bridgerton ad was first released earlier this month, during Samsung’s Unpacked event, where the company unveiled the S22.

The South Korean giant has also released an ad featuring the Batman (Robert Pattinson) and Catwoman (Zoe Kravitz) to advertise its S8 Tab, tying in with the movie hitting theaters in March.

Netflix’s historical hit series Bridgerton will return with its second season on March 25.

The new Galaxy S22 phone line, comprising the Galaxy S22, the larger Galaxy S22 Plus and the top-spec Samsung Galaxy S22 Ultra, which replaces the Note, complete with a garaged S Pen.