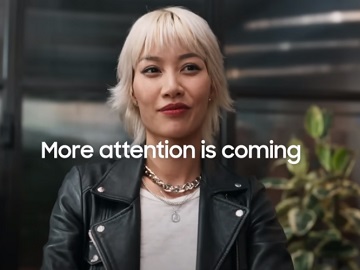 Samsung has dropped three new ads to announce its upcoming Galaxy Z Fold 4, which will be officially launched during its Unpacked event, set to take place next month.

One of the spots features customers in a coffee shop staring at something. Distracted by that particular something, the waiter spills coffee on the table while pouring it into a woman’s cup, a man stands still with two plates in his hand and a woman is looking open-mouthed at the woman who it turns out has just folded her smartphone after a video call.

“More attention is coming. Reserve now at samsung.com” onscreen lines read at the end of the commercial.

Samsung Unpacked will be taking place on August 10, 9 a.m. ET. Consumers who now reserve one, two or three Galaxy devices (smartphone, watch or Galaxy Buds) can get up to $200 Samsung Credit to use during pre-order. Additionally, they can get exclusive benefits, such as the highest online instant trade-in values and the possibility to customize their style with exclusive colors.