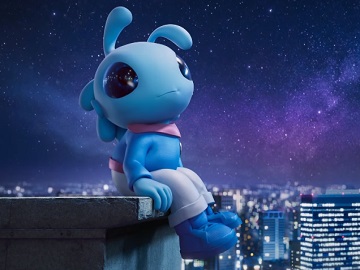 Samsung has released a series of new ads to introduce its top-secret engineer, G∙NUSMAS. The cute alien creature debuted its Boredom Break dance and its Delightful Device dance, and encouraged people to join his stage.

In one of the spots, G·NUSMAS, described by the brand as “whimsically brilliant Samsung engineer from outer space”, reveals its hidden dance superpowers that let it swing in and out of products. After showing off some dance moves on a desk, he enters a Samsung curved monitor , a Galaxy Z Flip 4 and jumps on a Samsung air purifier, as well. The alien with huge eyes and blue antennae, which accidentally stumbled upon Earth from Nowus-129, a planet that is 100 million light years away, says the whole world is his stage and invites you to join his stage.

The brand also revealed that G∙NUSMAS’ mission is to meet all the Earthlings on this planet that he can find.