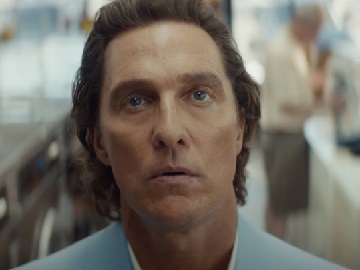 The spot, titled “The March” and part of the company’s “Team Earth” sustainability platform, opens with the award-winning actor in a laundromat, where – after watching a TV program tackling the issue of a global crisis – he gets closer to the TV and says “Hello, world. Or is it ‘Good bye’?” He is then shown embarking on a march through the city, giving the following speech:

“You know, it seems like hope and trust are in short supply.

Now, as businesses, we can blame and shame, or we can make a change. We can make work work for our communities, create more equal opportunities.

Let’s question again what we think we know, use our power and our people to pay back what we owe. It’s time for business to show its true worth. Because it’s not ‘Goodbye, world’, it’s ‘hello, Team Earth!”.

The commercial, which also sees hundreds of other people, including Idris Elba (who has starred, in the past, in an ad campaign for Salesforce), joining him on this march and clapping every time a suggestion is made, ends with McConaughey adding “Now, let’s get down to business”.

The actor appeared in Salesforce 2021 Super Bowl commercial, titled “New Frontier”, in which he also advised business leaders to work on planet Earth, which is still our office of choice, rather than dreaming up ways to retreat to Mars or the metaverse.