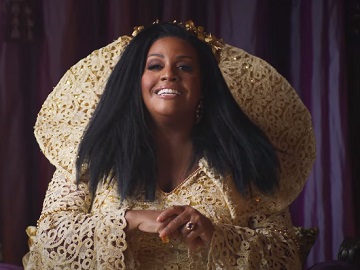 Sainsbury’s has enlisted presenter and TV personality Alison Hammond to star in its Christmas 2022 advert, which celebrates the innovation and creativity of the supermarket’ “Taste the Difference” Christmas range.

The festive spot, created by Wieden+Kennedy, immerses viewers in an imaginary medieval world, in a far, far away land, where the Countess (played by Hammond) is planning a feast. She has crab thermador crumpets, cider glazed gammon, and many other tasty dishes, but no pudding, declaring that she “never really liked Christmas pud”. The dessert is off the menu at the castle’s Christmas feast but a young cook rewrites the recipe and manages to impress the Countess with its new taste. “That’s a bit of me,” she declares, experiencing the taste of caramelized biscuit.

Consumers will have the chance to enjoy the exact same pudding – as it’s the Taste the Difference caramelised biscuit Christmas pudding – this holiday season, from Sainsbury’s, along with the Thermidor crumpets – available in stores from November 16, and gammon, available from November 23rd.

The holiday campaign continues to build on one of the retailer’s core missions this year, which is to drive its overall quality perception, as well as awareness and salience of the “Taste the Difference” brand.