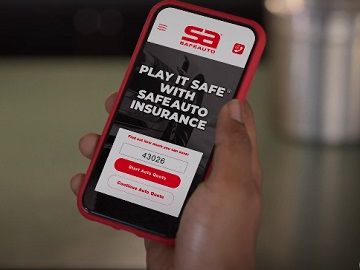 SafeAuto has dropped a new commercial to promote its services.

The 30-second ad follows a man through his “decision day”, which is the day he has to decide which company to choose for his car insurance. He wakes up at 7AM with an alarm reminding him that he must buy auto insurance. As he gets ready for the day and heads to the office, various things around him, such as a writing on the bathroom mirror and in the office elevator, appear in front of him to promote SafeAuto. He sees the SafeAuto logo and texts like “State Minimum Coverage” and “Low Down Payments”, while in the background the SafeAuto jingle plays.

Eventually, after being called “SafeAuto” in a coffee shop by the barista who has his cup of coffee, he chooses SafeAuto as the provider of his car insurance.

“Some things are worth putting off. Like your car insurance. Good thing we’re here to remind you,” the voiceover says at the end of the commercial.