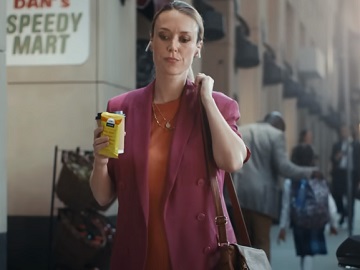 The ad shows a woman on her way to the office, in the morning, with a cup of coffee and an RXBAR A.M. in her hands, who accidentally drops one of her AirPods on the street. She rushes to pick it up, but she doesn’t manage to do that in time and sees it getting crushed by a moving car.

“Mornings are full of BS, Our RXBAR A.M. is not,” the voiceover says in the 15-second spot, which also features the woman taking a seat on a bench nearby and eating her RXBAR A.M, which has a great taste and a soft, crispy texture, 10gr of protein and no BS.

The RXBAR A.M. lineup, available in three varieties – Honey Cinnamon Peanut Butter, Chocolate, and Blueberry – can be bought from various local and national retailers, including Whole Foods and Target, as well as online, on RXBAR.com and Amazon. Prices start at $2.49 per bar, $8.99 for a 4-count, and 9.99 for a 5-count.