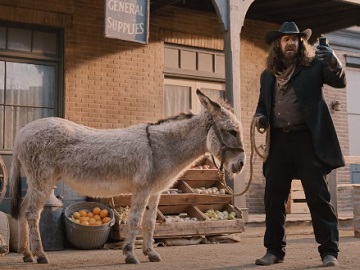 RingCentral has released a series of new ads to promote its app.

One of the spots, which aims to highlight that, whether you’re horse-trading or conducting a 21st-century business, RingCentral can help you communicate better and ditch the drama with call, meet, and message all in one app, features a band of outlaws calling Bonnie Boon to come out. At this point, RingCentral’s spokesmen, twin brothers Zak and Zach (played by Morgan Jay), show up, asking them to be cool and telling them that they’ve got Bonnie on a video call. When one of the bandits tells the duo that they don’t take kindly to video calls, he is told that he can just tap to send a message. Hearing that the outlaws are not eager to have Kylie’s message, Zak and Zach suggest a RingCentral phone call, which it turns out to be a great way for the two rivals to connect.

The end of the commercial sees the group leader in a tavern having a RingCentral video call with Bonnie and apparently closing a deal that involves a horse.

“More ways to connect. Less drama.” an onscreen line reads before the band leader is shown again, calling Bonnie and telling her that the animal he got (a donkey) is not the stallion he was imagining.