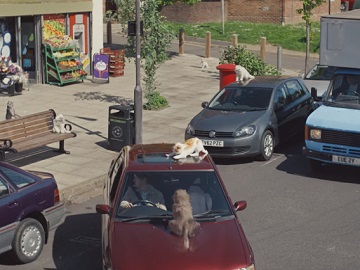 Ribena has released a series of new commercials that mark BBH’s first work for the brand.

One of the spots features a man who, failing to make a parallel parking in a tight spot on a busy high street, is approached by several cats, who advise him to grab a bottle of Ribena and let the parking to one of them. The man gets to relax a little bit but things are not that good, though, as the feline taking over the parking does an even worse job.

The ad concludes with the voiceover saying the tagline “When it’s Ribena high-pressure parking palaver… Chin up, my friend. Chin up”.

Another spot features a woman who’s checking her reflection in a tinted car window and finds herself in an awkward situation: a teenager rolls down the windowand gives her a chilling look.

The campaign is set to run across online video, OOH, social media and in-store marketing, prompting shoppers to reach for the drink “when it’s Ri-bena bit awkward”.

“Ribena is an icon mainstay of the soft drinks category. In actual fact, Ribena has been a familiar drink in the UK for over eight decades now. With the brand in strong growth, now is the perfect time to launch our new campaign,” said in a press statement Charlotte Flook, head of Ribena at Suntory Beverage & Food GB&I.