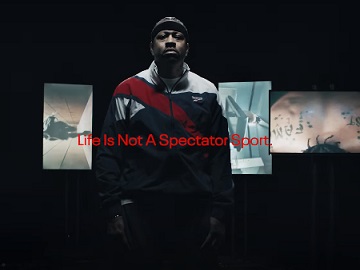 Reebok has launched a new campaign, titled “Life is Not a Spectator Sport” (based on Jackie Robinson’s famous quote) to mark the return to its roots to write its next chapter and inspire fans to pursue passions and become active participants in the world around them.

The ad features a diverse cast of athletes and artists including basketball icon Allen Iverson, singer, songwriter, producer and visual artist from Venezuela Arca, singer, songwriter and record producer Brent Faiyaz, Nigerian singer, songwriter and producerTEMS, American R&B singer and pop musician Lolo Zouaï and East London native rapper Ghetts and delivers the following message: “Life doesn’t happen all at once. It’s a collection of right nows, beginnings, afters, and beforehand. The invitation surrounds you. Life asking you to join in. Because life is happening. Life’s been happening. Life will happen. The only thing is we’re gonna happen too. Life is not a spectator sport”.

11-time all-star Allen Iverson said “Life is not a spectator sport. You’re involved in it, you’re part of it. You’re not just watching it from afar. You’re right in it.”