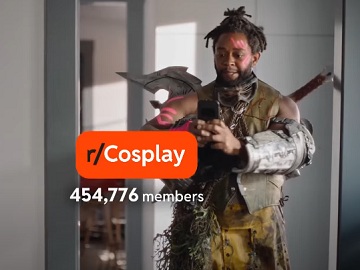 Reddit has launched a new multinational campaign, titled “Find your people”, which aims to highlight that, on this social networking platform, everyone can discover a sense of belonging and connect with like-minded people.

The spot features a series of individuals who share their thoughts on a particular topic and feel misunderstood by those near them. A man taking a shower who asks his partner if she ever noticed that hair and nails aren’t gross until they’re off your body is left talking to himself, in the bathroom, another man joins a Cosplay community on Reddit, knowing that those people get him, with respect to his wife, who thinks he’s doing his “dress-up thing” again, and one woman who is worried about the state of a plant in a pot, which she named Phil, believes that his owner doesn’t deserve him when the latter suggests her to buy a new one.

Reddit’s “Find your people” campaign, which includes national TV, connected TV, digital, social, out-of-home and experiential activations and is set to run throughout the summer, launched on June 27 in the US and Canada.

“We’re thrilled to reach new and existing Reddit users on national television while placing the value of Reddit front and center: being able to show up as your authentic self, without needing to share your name, gender, appearance, age, and so on, is what keeps our platform authentic and unique,” Reddit’s chief marketing officer Roxy Young said in a press statement.