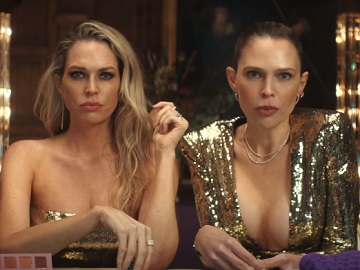 Rakuten has unveiled a new commercial, highlighting that you can get cash back while shopping from hundreds of fabulous fashion brands.

The 15-second ad, titled “High-waisted opulence”, features Erin and Sara Foster asking viewers to not themselves fooled by their opulence because they still appreciate cash back on lots of things, such as high-waisted jeans, trendy sunglasses, and adorable ankle boots.

The spot, which runned after the Big Game, ends with Erin telling her sister she can’t borrow the trendy sunglasses she’s wearing.

The Foster siblings are “The World’s First Podcast” hosts and their clothing brand, Favorite Daughter, is available to shop and earn Cash Back on Rakuten.

Rakuten, which marked its first-ever appearance at Super Bowl this year, has teamed up with Emmy Award-winning actress Hannah Waddingham for its “High Stakes” Big Game ad.