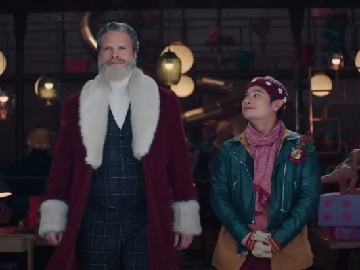 Rakuten features Santa in its Christmas ad, highlighting that “‘Tis the season for holiday savings you can believe in.”

The 30-second spot opens with Santa explaining to one of his helpers that he gets skeptical when things seem too good to be true. “You could say I’m a realist,” he says while he uses his magical powers to tie his shoelaces and perfectly arrange his beard and mustache with a single move. As he gets out of the building, followed by the same Christmas elf, he continues his speech. “Take Rakuten: now, how do they give shoppers cash back on top of deals at their favorite stores?” he asks. Surprised to hear about all that saving, his companion declares that it “sounds like holiday magic”, which makes Santa point out that it’s not holiday magic, but “just good sense”. “Far be it from me to tell you what to believe in, but I believe in Rakuten,” he tells the helper while heading out of his factory, to his reindeer-drawn sleigh filled with presents.

The cashback portal has promoted its website and mobile app in several ads over the years. Earlier this year, it teamed up with Emmy Award-winning actress Hannah Waddingham, and Erin and Sara Foster (founders of the clothing brand Favourite Daughter) and in 2019 partnered with three-time NBA champion Stephen Curry.

Consumers can sign up for free at rakuten.com and start shopping to get Cash Back at hundreds of major online retailers, including Walgreens, Office Depot, Intermix and Forever 21.

The cashback will be deposited in the Rakuten account consumers create. They will subsequently receive a check or a PayPal payment with their cash back, every quarter.