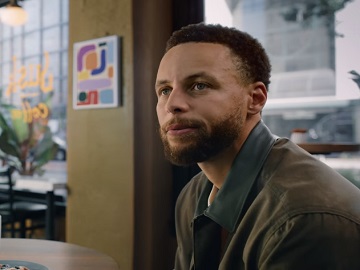 Rakuten has enlisted Stephen Curry for a new ad campaign, that introduces the Cash Back Shimmy dance.

The spot features a diverse cast of people who, after seeing how much cash back they earned, start doing the Cash Back Shimmy dance regardless of where they are. A woman, for instance, starts busting the dance moves at a bus station, one man on a basketball court, and another one in front of a coffee shop where Curry is having a cup of coffee. Seeing him groove, the NBA champion asks the waitress what his deal is and finds out that the man has just got cash back shopping witk Rakuten. “I know the feeling,” he tells her and shows her the cash back he has in his Rakuten app. He then explains that he just never dances in public.

The commercial ends with the onscreen line “Score cash back at thousands of stores”.

Rakuten announced its partnership with Stephen Curry back in January 2019. The three-time NBA champion became a Brand Ambassador and set out to collaborate with Rakuten on branding and marketing efforts for its global e-commerce business and membership program. Rakuten has also become the title sponsor of Curry’s basketball camp for overlooked prep athletes, “Underrated Tour, powered by Rakuten.”

The cashback portal has been promoting its website and mobile app in several ads over the years. Earlier this year, it has teamed up with Emmy Award-winning actress Hannah Waddingham, and Erin and Sara Foster (founders of the clothing brand Favourite Daughter).

Consumers can sign up for free at rakuten.com and start shopping to get Cash Back at hundreds of major online retailers, including Walgreens, Office Depot, Intermix and Forever 21.

The cashback will be deposited in the Rakuten account consumers create. They will subsequently receive a check or a PayPal payment with their cash back, every quarter.