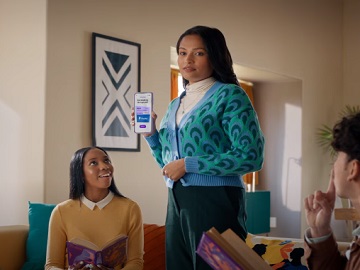 Rakuten promotes its mobile app in a series of new ads.

One of them features a woman attending a book club and saying that, in her book, saving while shopping is a no-brainer so she uses Rakuten to get cashback while she’s book clubbing. “With Rakuten, I get Cash Back at over 3,500 stores,” she says. When another woman asks how this works, the protagonist throws the book away and explains that stores pay Rakuten to send them shoppers. Then, Rakuten shares that money with its users in a check or PayPal payment. “It’s free and easy,” she also says, but the other people shush her. One of the book club members even tells her he thinks she’s missing the plot, which makes her answer she thinks they’re missing the Cash Back.

“Cha-Ching,” the woman sitting next to her says, with a fist bump with her friend.

Rakuten, which marked its first-ever appearance at Super Bowl this year, has teamed up with Emmy Award-winning actress Hannah Waddingham for its “High Stakes” Big Game ad. The brand has also enlisted Erin and Sara Foster to promote the app. Their clothing brand, Favorite Daughter, is available to shop and earn Cash Back on Rakuten.