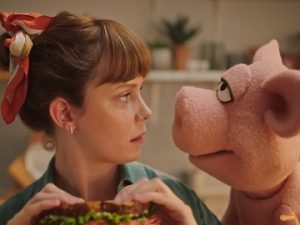 The spot opens with a woman’s hand opening a pack of Yorkshire Ham Style Slices and making a sandwich, while a voiceover declares that “the new Quorn ham style slices make the most delicious sandwiches”. The woman, named Lisa, is then shown taking a bite off her sandwich but stoping to look at the being talking near her, which is a pig speaking to the microphone. The latter, who it turns out is the voiceover in the ad, also says that he wouldn’t bother wondering what the alternative might be. At this point, a cow puppet and a chicken puppet show up to ask about the alternative he was talking about. The pig gets close to the woman’s face and tells her to forget about the alternative and his fellows agree.

The advert ends with the voiceover saying the tagline “Slices so tasty. Why choose the alternative?”