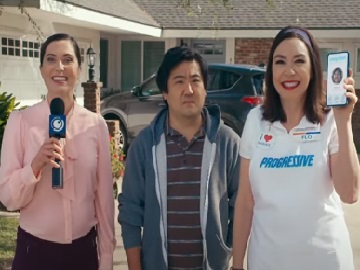 The spot is created like a news program where the announcers declare that it’s time for the “Good News of the Week”. They pass it to a reporter in the field who talks to a safe driver who saved money with the Snapshot app from Progressive. She asks the man how he feels and he answers he feels good as if it was obvious he feels that way. At this point, Flo shows up and, grabbing the reporter’s microphone, she states he’s better than good. “He got rewarded for driving safe and driving less,” she says, showcasing the Snapshot app. The anchorman can’t stop asking the reporter if this is the feel-good news of the week, which makes Barb, the reporter, admit that this is what they found. “Yay, Snapshot!” exclaims Flo, looking at the camera.

The end of the commercial sees the two announcers having a private conversation after this “Good News of the Week” episode. The man says that the woman in white seemed happy. “At least someone was,” his colleague replies.

Created by the agency Arnold Worldwide, Flo is played by actress/comedian Stephanie Courtney, who took over this role for TV in 2008. Courtney also portrays other members of Flo’s family, including her sister, Janice, her brother, Todd, as well as her parents and grandfather.

The Snapshot app, available to Progressive customers in select states, allows customers to use their smartphone to collect driving-related data, such as vehicle speed and time information, hard braking and mileage, and receive personalized tips on how to improve. Progressive uses the collected driving data to calculate a driver score based on which drivers can save money.

In states where Snapshot mobile is offered, new Progressive customers are eligible for a first-term participation discount, after which they will receive a personalized rate, meaning a discount or surcharge applied to their insurance premium based on their driving habits, at the next renewal of their policy. “For eligible customers who enroll, most will save money at renewal based on their good driving,” the company states, informing that, in some states, aggressive driving will generate a surcharge at renewal.