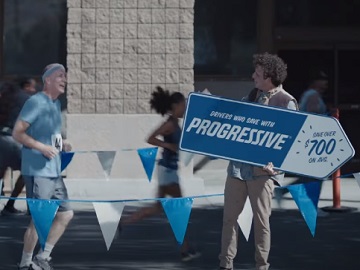 Progressive has released a new ad featuring the Sign Spinner and his dad.

The commercial sees the Sign Spinner (played by Mike Sullivan) spinning his Progressive sign, which informs people that they can save $700 when they switch to Progressive, near a place where a marathon takes place. When his dad, who’s running the marathon, sees him, stop for a few seconds, delighted to find out that his son has come out to cheer him on. The young man, who’s not enthusiastic at all, points out that he’s always there. “I’am always here for you, too,” his father tells him, misinterpreting his son’s words. The Sign Spinner then asks his dad to go, another word that the old man perceives as encouragement. He chuckles and keeps talking, but the Sign Spinner can’t help stating that everyone’s passing him in the race and urges him to start running again. “Oh, you got it, coach!” he tells his son before resuming the race.

“Switch to Progressive and you can save hundreds. You know, like the sign says,” the voiceover says at the end of the commercial.

This is not the first time the Sign Spinner’s dad appears in a commercial. In a previous one, he passes by to see his son and, seeing a young man with him, wants to know his name. He immediately comes up with a nickname for him, bragging that people love his nicknames. In another one, he replaces his son for a while keeps his promise of not spinning the sign.

In an older ad, Sullivan was joined on screen by American actress, dancer, and comedian Sunita Mani, who played the Sign Spinner’s girlfriend.