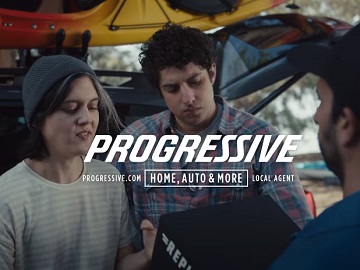 “Everybody wishes they could throw the challenge flag now and then. But what if life came with replay officials to help review key moments?” This is the idea behind the latest Progressive campaign, titled “Replay”. The insurance company invites you to watch the action unfold when people get a chance to go to the replay.

Titled “Life Jackets,” the spot features a couple on a camping trip starting an argument about who was supposed to pack the life jackets and forgot to do it. When the man throws his last challenge flag, they can find out what really happened and who is the “guilty” one by watching a “What Really Happened Replay” – brought to them by Progressive.

The voiceover points out that there is one thing no one would challenge, though, and that is protecting your home and auto with Progressive.

The end of the commercial sees the wife teasing her husband about his bragging, before they left, that he obviously wouldn’t forget to take the life jackets.

Progressive is known for its campaigns starring Flo, Jamie and the rest of her squad, John Hamm, who rekindles his old flame for Flo, Dr. Rick, who helps homeowners un-become their parents, and Ed Helms, who help new drivers master insurance basics with his songs.