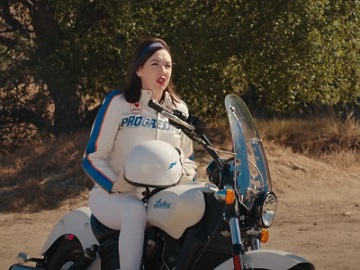 Flo finds out the Loyal Order of Riders is passionate about riding but stubborn about nicknames in the latest Progressive commercial.

The ad features a group of riders getting all together to share their queries. While one of the riders would like to have some little handles on their jackets for the passengers to hold them (so that they wouldn’t wrap their arms around the riders anymore) and another one would like to have a new nickname (Snake), Flo suggests getting quotes to see if they can save with America’s #1 motorcycle insurer. The Loyal Order of Riders approves her query, but not the rider’s query related to the nickname. Flo takes the opportunity to “steal” Bryan’s nickname, but the riders refuse to allow her this change. She tries to tell them to talk about policy details for a little bit, but she is also treated with a big “No”.