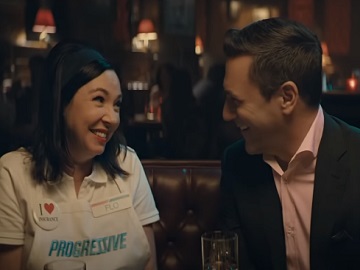 Jon Hamm and Flo might become America’s hottest new celebrity bundle. Progressive has released a trailer for a series called “Love and Other Bundles,” inviting viewers to get ready for Flo-mance.

The 30-second video, created like a trailer, introduces Flo as “a ubiquitous insurance spokeswoman” and John Hamm as “your everyday Hollywood leading man”, and nods at an old romantic relationship between them. “But when fate brings them back together, old flames will be rekindled,” the voiceover says in the promo, which sees Flo at a late-night date with Hamm, telling him a story of how she once pointed out to someone she had said “Bundle and save” not “Bundle and shave” and bursting into laughter.

Love and Other Bundles will also star Jamie, who tells Jon, in one of the scenes included in the trailer “You got to find your moment, Hamm!”, and the rest of the Progressive team.