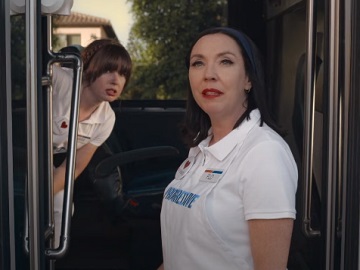 Progressive has launched a new ad featuring Flo, Jamie and the rest of the crew, to promote its bundling options.

Titled “Coming of Age”, the spot features the Progressive team getting on the bus to leave the Progressive house. Flo gets emotional and stops at the entrance to look back and relive for a moment the experiences she had there. “I’ll remember that chapter of my life forever,” she says, mentioning “We laughed, we cried, we protected that Progressive home & auto bundle day and night. We were all of us dazzling, like knights sworn to protect our kingdom. We knew it wouldn’t last forever, but… that’s what made it special.”

At this point, Mara interrupts her, asking “You know we’ll be back tomorrow, right?” “Yeah, but it’ll never be today again,” answers Flo, which makes her colleagues groan and ask her to just get on the bus.

Actress/comedian Stephanie Courtney, who plays Flo, took over this role for TV in 2008. Courtney also portrays other members of Flo’s family, including her sister, Janice, her brother, Todd, as well as her parents and grandfather. In 2017, she was joined by Jim Cashman, who plays Jamie.

Progressive has also enlisted Natalie Palamides as Mara, who joined the Progressive team back in 2020, Paul Mabon as Alan, Christine Tawfik as Lucy, Brian Stepanek as Bob.

The insurance company is also known for its ad campaigns featuring Dr Rick, the Parenta-Life Coach, who helps new homeowners to not turn into their parents, and the Motaur (played by Terrence Terrell).