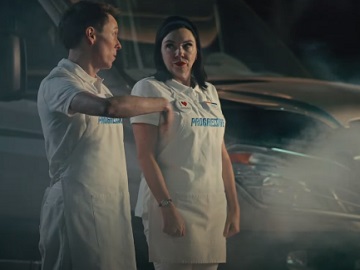 Progressive has released a new commercial to promote its RV insurance and the upcoming Jurassic World: Dominion.

The spot features dozens of people running away from an outdoor movie theater when a dinosaur appears snarling. Flo and Jamie point out to an RV owner that it’s a good thing he bundled his home, auto, and RV insurance with Progressive because this way he saved money and gets round-the-clock protection. “Don’t worry, it’s all under control,” Jamie also tells him, while all of others are desperate to escape the attack. “That’s cool, we’ll finish up here,” he says when he hears some people screaming and adds “That’s why you go to the restroom before the movie starts”.

“Get epic protection for your dominion with Progressive,” the voiceover says at the end of the commercial, urging viewers to see Jurassic World Dominion in theaters starting June 10.

Jurassic World Dominion, the sixth Jurassic film and the end of the franchise, features the original film’s three lead characters, played by Sam Neill, Laura Dern and Jeff Goldblum, back together for the first time. Directed by Colin Trevorrow, the movie is set four years after the destruction of Isla Nublar, in a world where dinosaurs live and hunt alongside humans all over the world. “This fragile balance will reshape the future and determine, once and for all, whether human beings are to remain the apex predators on a planet they now share with history’s most fearsome creatures in a new Era,” the plot reads.