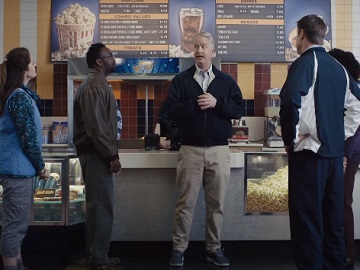 Dr. Rick is back to the small screen in a new Progressive commercial. This time, he takes a group of young homeowners on a trip to the cinema where he helps them learn how to handle snack prices, restrooms, and coat placement.

The spot opens with the Parenta-Life coach telling his “patients” that snacks and popcorn are gonna be expensive and they need to accept that. He explains that going to the movies can be a lot for young homeowners turning into their parents and it can even be painful for some of them. At the cinema, when one of the women suggests they should try the bathroom, Dr. Rick says they all know where the bathroom is and how to use it, and when another one asks her fellows to give her their coats because there is an extra seat near her, he points out that they don’t need a coat wrangler.

At some point, while looking at a movie poster, another woman says the Stevensons told her they saved money bundling their boat insurance with Progressive.

“Progressive can’t help you from becoming your parents, but we can save you money when you bundle home, auto and more with us,” the voiceover says at the end of the commercial.

In previous commercials, Dr. Rick helped young homeowners deal with the very real struggle of not turning into their parents using other methods. One of them consisted in asking them to answer a series of “very real and pressing questions,” like “How many pillows are too many?” “When does helping become hindering?” “Who reads books about Submarines?”. Another method consisted in a group outing at a store called House World. He has also accompanied a man to a grocery store for gameday shopping and stayed close to another man while he was having a plumber fixing a problem under the kitchen sink, reminding him about the 10-foot rule.

Dr. Rick has also been promoting his book, titled “Dr. Rick Will See You Now”, which is described as the ultimate guide to help sufferers everywhere unbecome their parents. “It’s me in a book, but you get to talk back to the book, which is like talking to me. So it’s an interactive parental life journey that I’m super proud of” Dr. Rick says in one of the ads for his book.