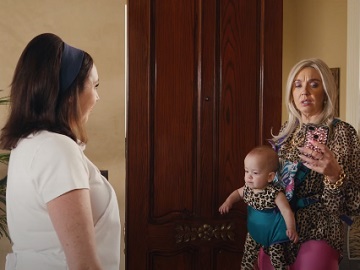 Progressive has released a new commercial starring Flo and her sister, Janice. This time, the latter is a mother and calls Flo to have her talk about insurance to put her baby to sleep.

The spot opens with Flo ringing at her sister’s front door and seeing her little nephew, who is a baby carrier. She tells Janice that he looks more like their dad every time she sees him, but Janice doesn’t seem to share her idea, replying that Dad is old. She then points out that her text message said she wanted Flo to talk about insurance and Flo starts talking. “Most people know that bundling home and auto saves you money,” she says, adding that “new customers who bundle and save with Progressive can save an average of $800”.

At this point, Janice, who got what she had wanted – her baby falling asleep – shushes Flo and shuts the door, leaving Flo speechless.