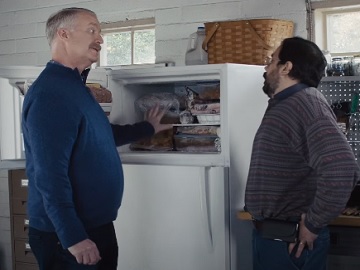 Progressive has released a new commercial starring Dr. Rick, who endorses the internet, just not printing the internet.

The spot features the Parenta-Life coach dealing with a series of new homeowners who turn into their parents. In his attempt to help them not to, Dr. Rick, who says that, sometimes, the house itself can tell you how a young homeowner is turning into their parents, sets out on a mission to cleanse various places in their houses, such as the freezer (which is just a freezer, not a time capsule), the garden (which he clears by taking some gnomes), and more.

When a man shows him on several pieces of paper that there is Progressive’s HomeQuote Explorer website, where he compared home insurance rates, Dr. Rick tells him that they don’t need to print the Internet.

He also asks the man who stuffed his freezer to tell him what it is, with the promise to give him $100 if he can do that, but it turns out the young homeowner doesn’t remember anymore what that was – he thinks it’s scotch egg when it’s actually a meatball.

“Progressive can’t help you from becoming your parents, but we can help you compare rates on home insurance with HomeQuote Explorer,” the voiceover says at the end of the commercial.

This new campaign can be considered a continuation of the “Parentamorphosis” campaign, which was created by Arnold Worldwide in 2016 and became Progressive’s most successful effort without spokeswoman Flo. In previous commercials, Dr. Rick helped young homeowners deal with the very real struggle of not turning into their parents using other methods. One of them consisted in asking them to answer a series of “very real and pressing questions,” like “How many pillows are too many?” “When does helping become hindering?” “Who reads books about Submarines?”. Another method consisted in a group outing at a store called House World. He has also accompanied a man to a grocery store for gameday shopping and stayed close to another man while he was having a plumber fixing a problem under the kitchen sink, reminding him about the 10-foot rule.

Dr. Rick has also been promoting his book, titled “Dr. Rick Will See You Now”, which is described as the ultimate guide to help sufferers everywhere unbecome their parents. “It’s me in a book, but you get to talk back to the book, which is like talking to me. So it’s an interactive parental life journey that I’m super proud of” Dr. Rick says in one of the ads for his book.