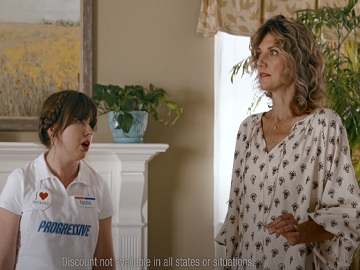 Progressive has released a new ad to promote its Renters and Homeowners insurance.

The spot features Mara (played by Natalie Palamides) doing reverse psychology on a potential customer who is not 100% convinced that she should get home insurance from Progressive. When Flo tries to say something, Mara interrupts her, pointing out that the woman is not interested. “It’s fine, Flo. She’s not interested,” she tells Flo and then, looking at the lady, adds: “I get it, not everyone wants to save money”. At this point, Alan (played by Paul Mabon), who’s witnessing the conversation, can’t help asking Flo what their colleague is doing.

Mara keeps talking to the potential customer, telling her that renters and homeowners can bundle and save. “For what? A trip to Bora Bora?” she also asks, making a joke that it’s “Bora boring”.

To Flo’s surprise, the woman declares that she’s in. Mara then decides to leave her to Flo and head out to grab some tacos. She even invites Alan, but he refuses, saying he’s not in the mood. At this point, she starts again a reverse psychology action with him, managing thus to convince him to join her for some tacos.

Palamides joined the Progressive team back in 2020. Actress/comedian Stephanie Courtney, who plays Flo, took over this role for TV in 2008. Courtney also portrays other members of Flo’s family, including her sister, Janice, her brother, Todd, as well as her parents and grandfather. In 2017, she was joined by Jim Cashman, who plays Jamie, Progressive has also enlisted Christine Tawfik as Lucy, Brian Stepanek as Bob, Xian Mikol as Jamie’s wife, Regan Burns as Rodney, Bill Glass to portray Dr Rick, the Parenta-Life Coach, who helps new homeowners to not turn into their parents, and Terrence Terrell to portray the Motaur.

Previous: Haven TV Advert – Have So Much More For So Much Less
Next: ManyPets Woman at Therapist Advert