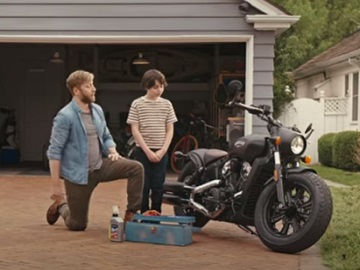 Progressive has released a humorous new ad starring Flo and Jamie to promote its motorcycle insurance.

The spot, titled “Life Lessons,” opens with a father (who is also a motorcycle rider) telling his little son, who is standing near his motorcycle, that with a little elbow grease he can do just about anything. As he puts his hand on the boy’s shoulder and looks him in the eyes, the man, named Robert, finds himself in the kid’s position, with Jamie’s hand on his own shoulder. Jamie confirms what Robert had said and says it’s never too early to learn he could save with America’s number one motorcycle insurer. At this point, Flo shows up, placing her hand on Jamie’s shoulder and mentioning that “it’s not just about savings, it’s about the friends we make along the way”.

The series of life lessons doesn’t end here, though. There is a hand placed on Flo’s shoulder, as well. It’s Dr. Gary’s hand. The doctor takes the opportunity to remind Flo and the other to floss before they brush. “Your gums will thank you,” he adds Suddenly, he is taken by surprise by Jamie, who appears at his back. Jamie explains he had another thought, so he got back in line, but he can’t remember the thought.