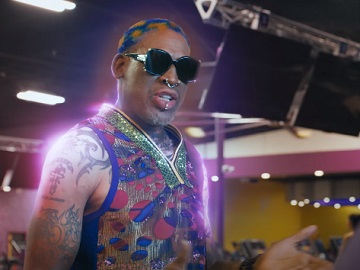 The spot, created by Publicis New York and directed by Biscuit Filmworks director Andreas Nilsson, opens with Black-ish star Jeff Meacham saying that he recently learned of a ship that can transport you to a land of pure happiness. Star Trek icon William Shatner asks him if it’s a spaceship, but Meacham reveals it’s actually a membership to Planet Fitness, “the judgement-free zone”. Meacham goes on, describing this membership as “a membership to feeling good”, “a membership that lets you work on all your stress for zero enrollment and $10/month?” and “a membership to feeling high after your workout”. At this point, NBA legend Dennis Rodman shows up, all glowing and explaining that it’s all about the endorphins. Meacham takes the opportunity to point out that “It’s the kind of high that won’t show up on a urinalysis test”.

“Get to this place, I tell you!” Meacham also says at the end of the commercial, which also sees actress Jane Krakowski and TikTok’s @AngryReactionsGuy make appearances.