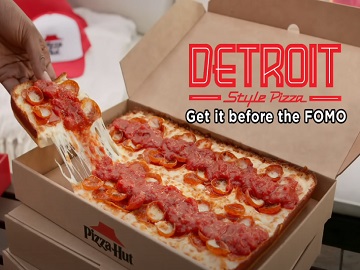 Pizza Hut has released a new commercial to announce that its Detroit-style pizza is back.

The spot features an argument between two women, each representing two different teams – Team Clueless and Team Detroit. When the one from Team Detroit says that’s where the cheese comes in, her “opponent” says she doesn’t get it. “It’s a thick crust with crispy edges. What is there not to get?” the Team Detroit girl asks. At this point, a third woman shows up, giving an answer to this question and naming the sauce on top. “You haven’t even tried it yet,” points out the girl from Team Detroit. A man standing nearby with Craig Robinson tells the latter she’s got a point, which makes Robinson reply “I don’t want to talk about politics”.

The commercial ends with the voiceover announcing that Detroit-style pizza is back at Pizza Hut and with Robinson adding the tagline “No One OutPizzas The Hut”.

This is not the first ad starring Robinson. The comedian appeared in several other ads for the pizza restaurant chain, created by agencies GSD&M and Tool of North America, promoting the Original Stuffed Crust, the all-new Edge, with thin, crispy crust and toppings to the edge, the Big Dinner Box, which includes enough pizza, wings and breadsticks to feed the entire family, and the $10 Tastemaker.