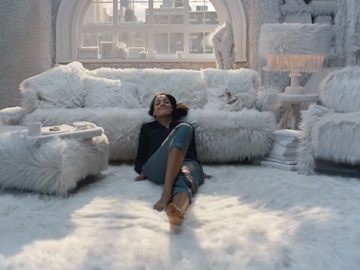 The spot, part of the “You don’t just taste it. You feel it” campaign, features a curly-haired woman whose living room becomes all fluffy, just like her white cat, after she tastes a slice of bread with Philadelphia cream cheese. The rug she’s sitting on, the sofa and the armchairs, the walls are all getting covered in a white fluffy material that makes her want to snuggle. However, her cat doesn’t seem to delighted by what she sees.

“You don’t just taste it. You feel it.” onscreen lines read at the end of the commercial.

The soundtrack is provided by Irma Thomas’ 1966 single Take a Look. The song appears o the singer’s album of the same name, can be bought from Amazon for $1.29.

Other ads in the campaign feature a woman who, after getting a bite of a bagel with Philadelphia cream cheese spread, is transported above the clouds, where she’s floating relaxed, watching at a bagel-shaped sun and smiling, and a man in a bathtub who feels like he’s floating in the ocean after eating a biscuit with Philadelphia.

Previous: Visionworks Buy One, Get One Free Canyon Commercial
Next: Skyrizi Nothing Is Everything Country Version Commercial Song