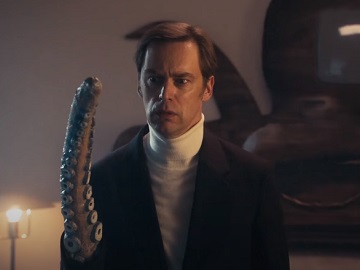 The spot is created like a science-fiction series from the 1970s and opens with a man in his office who talks about the Octocurse. “It is said that if you eat octopus you will be cursed. This curse is called the Octocurse,” he says and then shows “very real evidence of people who have fallen subject to this very real curse”. Viewers get to learn thus that those who eat octopuses will develop three beating hearts, their blood will run blue, they will become extremely emotional, their heads will expand to octopus proportions, they could expel ink like an octopus, and turn into oddly-looking creatures.

“So we still eat octopus and risk getting the octocurse or do we choose to stay human?” the man asks, raising an arm in the air but revealing he has an octopus tentacle instead.

A voiceover declares that octopuses are extremely intelligent sensitive creatures and, if you eat them, you’re basically a cannibal. “Stay human! Don’t eat octopus!” he urges viewers at the end of the video.

“We are busily searching for intelligent life in space while we still eat the thinking, feeling life forms on our own planet. Octopuses, for example, are capable of complex thought processes: they can navigate mazes, use tools, and learn how to do such things as unscrew lids simply by watching. Yet every year, hundreds of thousands of these clever cephalopods are killed in crude ways for a snack. Because it’s often hard to reach people with these simple facts, PETA has partnered with Grey London – to give viewers food for thought and encourage them to show kindness to these animals by leaving them off their plates,” Vanessa Johansson, Anti-Speciesism Project Leader at PETA said in a press release.